May I confess now that I’ve never seen any of the Underworld movies, and don’t care about Selene? Sure, from what I can see, she looks pretty cool in the black trench coat, but she seems way too much like a vampire version of The Matrix character, Trinity, who is awesome enough without even being a vampire.

But I digress. The vampy-ladies who make

my list are all idiosyncratic originals — though not “originals” in The Vampire Diaries sense. None of the VD vamps make my list either, but Caroline Forbes came close — maybe “Best Obsessive- Compulsive Teenage Vamp.” That’s another thing — each of my vampettes gets an award for something. They deserve it. They’ve influenced my dreams, nightmares, writing and possibly even my fashion sense. Alphonsine, the protagonist of Blood Diva, owes a lot to them. 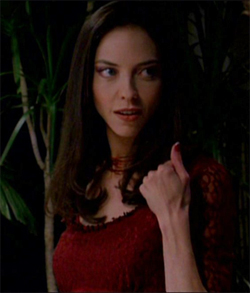 10. Drusilla  (Buffy The Vampire Slayer) – Wins the Award for: Best Tragically Crazy Vamp. Sure Dru can be evil (as all are vampires in the Buffyverse), but it’s not her fault. Her cassandra like pronouncements and predictions have a kind of poetry, and behind her fragility is hidden strength. (Style: Victorian frail/heroin chic)

9. Kathleen Conklin (The Addiction) Wins the Award for: Most Intellectual Vamp. Abel Ferrara’s 1995 film has become a cult favorite. Lily Taylor, portrays the mousy grad student Kathleen, whose life is transformed by a bite from a very  hot  Annabella Sciorra, Kathleen grows into an assured vampy killer (although by the end, it’s not that clear that she is a killer or if everyone she bites becomes like her). (Style: Jeans, oversized shirts and sweaters, combat boots. Add sunglasses after her transformation.)

8. Mae (Near Dark) Wins Award for Best Manic Pixie Vamp. Before this 1987 cult film,  an early effort by director,  Kathyrn Bigelow, vampires were generally sophisticated types with capes and posh foreign accents. Here we had redneck vampires as crude as they were cruel, but Mae had a kind of luminescent innocence. Our young hero loves her and wants to save her. But can the damned find a happy ending? (Style: Tom-boyish in a totally fem way.)

7. Eli (Let the Right One In) Wins Award for Best Tween Vamp. In this Swedish vampire flick, Eli is forever-12 and needs help getting her prey. She becomes friends with the lonely Oskar. Can a vampire movie be a sweet tween love story with some darker tones? Yes, yes it can. (Style: understated. She stays indoors most of the time)

6. Akasha (Queen of the Damned – book and film) Wins Award for Best Vampire Queen. The film was incomprehensible. The book overly complicated (to put it diplomatically). But Akasha deserves a shout out. Before her rise, who even thought of vampires as a race with a specific origin story? (Style: Ancient Egypt by way of  Hollywood.)

5. Countess Marya Zaleski (Dracula’s Daughter) Wins Award for Best Classic Cinema Vamp This 1936, Hollywood film begins with Dracula’s death. His daughter is hoping that means the curse on her is lifted and she will get to live as a real girl. No such luck. The film was said to have influenced Anne Rice herself, and it’s easy to see how. While Marya is not exactly a sympathetic character, the Countess (like Louis) wants to change. Also points for being nobody’s “bride” or “minion.” (Style: Black is the new black.)

4. Miriam Blaylock (The Hunger) Wins Award for Most Seductive Vamp EVER. Ooo-la-la. Catherine Deneuve! ‘Nuff said. The sex seen with Susan Sarandan still gets gazillions of hits on Youtube. (Style: Anything she wears is chic.)

3.Vampira (Plan Nine from Outer Space, The Vampira Show, etc) Wins Award for Best Camp Vamp. Performer Maila Nurma based the character partly on the Charles Addams’ cartoon character who would later morph into Morticia Addams. Vampira made graveyard puns like signing “epitaphs” rather than autographs. She drank cocktails with eyeballs as garnish. She was a sexy, funny, bad girl, goth-chick long before that was even a thing. (Style: Diaphanous gowns, with excessive make up, and attitude.)

2. Carmilla (from the novel of the same name, and a few film appearances) Wins Award for Best Original Vamp. Twenty-six years before the publication of Dracula, there was Carmilla. Joseph Le Fanu first published his gothic novel in 1871 as a serial. Many of the female vampire tropes still with us were born with her – including her sapphic tendencies. She’s a mysterious and seductive dark-haired beauty. (Style: Mostly black dresses. She always looks like she’s attending a funeral. Maybe her own.)

1. Claudia (Interview with a Vampire) Wins Award for Best Child Vampire. First of all, EVERYONE writing vampire fiction in a post-Interview with a Vampire world owes a great debt to Miss Anne Rice. Even if you’ve never read her, you owe her. She invented vampires as full-bodied characters and was the first to give us an entire book from the point-of-view of one. Claudia is arguably her greatest invention, the child-vamp stuck forever in a tiny body, unable to fend for herself, forever dependent and frustrated, innocent and depraved. Although Kirsten Dunst was a brilliant child-actor, the character in the novel was only six when she was turned, which made her even scarier. (Style: Period children’s clothes, cute, innocent, precious. She might prefer something more grown up, but it doesn’t work for her.)

(If you’ve enjoyed this post, there is a chance you’d like to read my novel Blood Diva.)