If you haven’t already heard of her, you have — but you don’t know it yet. Marie Duplessis was a popular courtesan, and famously the lover (at different times) of both Franz Liszt and Alexandre Dumas, fils. When she died of consumption at the age of 23 in 1847, it made headlines around the world. (Notice in the portrait on your left how all the men watch Marie, and all the women watch the watchers. When she went to the theater, she was the show.) 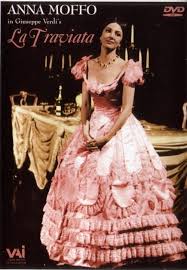 You may know her as “Camille” aka Margeurite Gautier, her fictional counterpart as seen in a number of movies, or perhaps as Violetta, the heroine of the opera La Traviata.  For a quick but not very accurate look at the life of Marie Duplessis, there’s always Wikipedia.

For something deeper you might try this new biography. 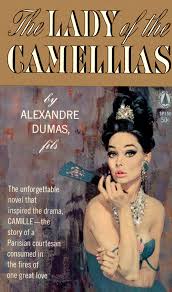 Then there’s that novel one of her ex’s wrote in about 3 weeks and published after her death. Exploitation? Or an act of love? You decide. (She looks a bit Holly Golightly in this one, no? But why shouldn’t she? Capote would never have been able to create his heroine if she hadn’t existed.)

In addition to the old films, the book, the opera and the ballet, she continues to haunt us. There’s more than a  trace of her in Satine, the character played by Nicole Kidman in Moulin Rouge, and in Pretty Woman when Richard Gere takes Julia Roberts to the opera, it’s La Traviata that they go to see.

You might enjoy this old movie trailer, and of course any true fanatic would have to read the new novel imagining Marie’s existence as the very model of a postmodern vampire in Brooklyn.