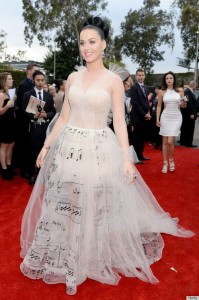 I didn’t watch the Grammy’s and mostly what I heard about was Kanye West’s latest “tell us what you really think even if nobody asked” rant.  Then today, trolling the internet for references to La Traviata as I am wont to do, I found out about Katy Perry’s Verdi inspired dress by Valentino.

The opera/classical music world as well as the fashion world seemed to notice. Most people probably just thought — nice dress.

What grade would Vampire Alphonsine give it? I’m not entirely sure. Marie Duplessis herself tended toward more modesty in her public appearances and certainly the fashions of the times would not have included something so sheer. However, there were those sex parties — like the kind DSK is accused of having participated in — and they wore all sorts of costumes at those.

Speaking of which, did you see that bit in the papers where DSK claims he didn’t know the ladies involved in his “libertinage” were prostitutes? Right, because women who aren’t getting paid are dying to be sexually brutalized by this troll. Yeech, he’s far worse than the billionaire-politician in lust with the heroine of my Traviata inspired novel.

Katy wore the dress well, but should they ever make a Blood Diva movie, she wouldn’t be my dream casting. The face might be right, but I imagine a more Audrey Hepburnesque body. Love the hair though. That was Audrey-like, specifically Breakfast at Tiffany’s, which reminds me of this book cover for The Lady of The Camellias, the novel on which La Traviata was based. The book was published in the 1848 after the woman on whom it was based was barely cold in the ground (or was she???). The cover featured here was of course of a much later edition post the Hepburn-film. Of course Capote’s Holly Golightly was a sort of latter-day Marie Duplessis — the real life heroine of Camellias and La Traviata.

If you’ve wound up on this blog through a web search regarding that dress, I can’t tell you much, but if you like to know more about the real woman who inspired it, you can click here. If you’re interested in reading Blood Diva — a sexy, modern vampire story, that like Valentino’s creation, owes a debt to a certain Parisian courtesan, you can see some reviews and download a sample here.