VM August 12, 2014 Marie Duplessis, The Road Ahead No Comments

Those of you who’ve been following along, know this isn’t my first tango. I’ve sold a book or two under my “real name.” But somehow I’m more excited this time. Maybe because the last “full-length novel” I published was something I’d been carrying around for years. It came close (but no cigar) to grabbing the attention of a very important agent or two. I had “friends” when I started sending it on its rounds. Then nothing happened for a very long time until finally a lot happened but not what I thought was going to, and it wound up being out in the world under circumstances I never would have imagined.

But this time things were different.While some people say the self-publishing stigma is lifting, I was convinced it was worse — too many bad books out there, too many fake reviews and author shenanigans, too many unscrupulous types trying to make a buck off of wannabes who’d never see their dreams come true. And yet, all that didn’t extinguish my excitement —  the sense I was embarking on a great adventure  – one that would require teamwork, growth, faith (in myself and others) and the belief I had something to say that strangers would want to hear, and once they heard it — we would be strangers no more.

Blood Diva was a book I knew from the start would be self-published. There was no initial feeling of “failure” because I couldn’t interest an agent. I never tried. The other day, I read a Huff-Post piece by an “insider” confirming what I’d intuited, and had already written about on these very pages. What was the great revelation? Agents and publishers need you to prove your book will sell before they’ll buy it. The shiniest authors get the contracts. If you don’t have a “platform” they’re not going to help build you one. Publishing (the industry) isn’t about discovering talent. It’s about exploiting it.

I was free of all that.

Because I knew from the start what it would entail, I could focus on the work, not what would or wouldn’t happen when I sent it out. I could get excited about building a cover image because I knew creating one would be my job. While I had beta-readers (and took their critique seriously) along with some (unpaid) proofreading help, I mostly self-edited, which meant I did countless drafts, but in the process I became more certain of my choices. I got to make decisions about formatting — one of the few areas I spent a little money on, and  I enjoyed the feeling of both being the decision maker and working with someone whose skills and judgement I trusted.

Here’s the paperback cover btw. (Yes, I did start with a public domain image and I did have some unpaid, but very skilled help.) 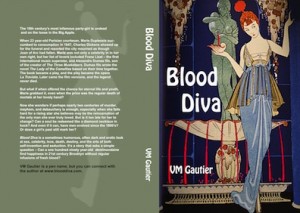 I know some readers hate it when writers refer to books as their babies, but I feel like I’ve not only given birth,  but raised a child to adulthood all in the course of a year and a half. Now the wee thing is out in the world, and all I can do is cross my fingers and hope for the best.

But that’s not even what I started to write about. The whole purpose was to show you the “proof” for the mug which will soon be swag. This is a black and white version they sent, just to make sure placement was right. How do you like it?

(If you have any interest in finding out more about Blood Diva, the sexy, postmodern, Marie Duplessis vampire novel, please click this or any link.)