VM June 23, 2015 Marie Duplessis, The Road Ahead No Comments 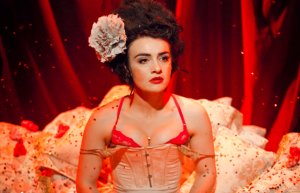 The picture to your right is from a play — a modern cabaret, performed in Australia, starring it’s creator, Sheridan Harbridge. It imagines Marie Duplessis’ last birthday.

I’d like you to know Marie. She’s all around. Marie Duplessis inspired me to write Blood Diva.  She’s inspired paintings, novels, movies, plays, operas and ballets. Some of them take place in the time she lived, many are set later. If you want to know more about that or who she was, you can read up on her. I’ll try to keep this post mostly visual. It consists of five randomly chosen pins from my Pinterest page.

Here’s one from a 1960s movie inspired by her story.It’s kind of a soppy film, but it was popular once upon a time. In the movie, the female lead was not a prostitute, but she was born poor, and that was enough to anger her lover’s father. Also, as in Marie’s story, she died young. (Sorry, for the spoiler.)

To your left, Charles Ludlam in drag as  Marguerite Gautier, the character based on Marie in the play known to us as Camille. I have the feeling the real Marie would have appreciated this slightly off center version of her fictionalized self.

Opera — It’s sexier than you think.

On the right, soprano Alexandra Kurzak portrays  Violetta, the heroine of the opera, La Traviata, which was inspired by Marie’s myth.

Finally, no biography of Marie Duplessis through pictures would be complete without a book cover of The Lady of the Camellias, the barely disguised fictionalized version of her story that started it all.