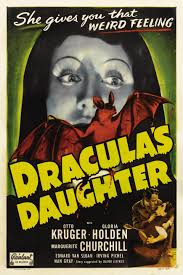 You might have seen Dracula’s Daughter at some point. A classic horror marathon on TCM or somewhere? Maybe not. While there’s an intriguing trailer with some hint that this lady vamp has no particular gender preference when it comes to the blood-sucking, generally there’s less action of any kind in this relatively short feature than you might be hoping for.

I’ll be giving a recap with running commentary, so there will be spoilers ahead. (Not that it matters, everything that’s going to happen is telegraphed.) If you want to play at home, you can get the movie on DVD through Netflix. It’s not rentable for streaming on Netflix, Amazon,or Youtube, but if you google you might find it somewhere –though I can’t vouch for the legality. Just pour yourself a drink at every trope and you’ll enjoy it.

We open in a mausoleum with two bumbling bobbies. Their uniforms indicate that we are in the present – 1936. There are two dead bodies. One of them is Dracula with a stake through his heart. Don’t vamp bodies disintegrate in the old-timey movies? That’s one trope they’ve dispensed with. The other body is Renfield. An old gent by the name of Professor Van Helsing is the only living witness. He explains that Dracula killed Renfield, and he killed Dracula. He is arrested for murder.

Visually, absolutely nothing interesting is going on here. James Whale or Tod Browning could paint with light and shadow to shake up our senses. No such luck in this film.

Because Van Helsing is an important scientist, rather than get thrown into the hoosegow, he meets with Sir Basil, the head of Scotland Yard and tries to convince him that the undead walk amongst us. How could he be charged with killing a man who died 500 years before?

Where are Mina and Jonathan and the rest of the Scooby-gang? Not even mentioned.

Sir Basil tells Van Helsing to lawyer up. Van Helsing is planning to hire Jeffrey Garth – a psychiatrist and his former student, to defend him. Why? Some answer that made no sense.

Meantime, our bumbling bobbies are guarding the two corpses which have been brought to a jail and locked in a cell. The less stupid one has to leave the other in charge. A woman wearing what looks a lot like an abaya with only her eyes showing, enters the jail. She hypnotizes him with a ring.

We cut away before we see exactly what she does next. There’s a lot of that in this movie. It’s very restrained. Not in a way that actually works to create mystery or doubt about what’s actually going on. More like an attempt not to actually frighten anyone. 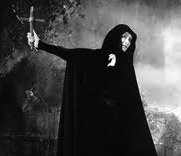 The woman in black manages to hold a cross as she  stands by the fire which is consuming Dracula’s body. Her creepy servant Sandor is assisting her. She’s convinced that with Dracula’s death the “curse” over her will be lifted. Sandor isn’t so sure. Sandor is right. As the night progresses, she needs to hunt. She’s in the shadows on a street. A man approaches. We don’t watch her actually feed. Eighteen minutes in and we haven’t seen anything remotely scary. Is this post-code? Or just lousy filmmaking?

Cut to some hospital setting and an autopsy of the victim. “If we only knew what caused those punctures so close to the jugular vein,” Somebody says. Somebody is of course, Jeffrey Garth, who we next see talking to his old mentor, Van Helsing. Garth is all about the “science” while Van Helsing is Agent Mulder.

Jeffrey and Janet, his assistant arrive at a dinner party. Janet is the daughter of a baroness. She and Jeffrey spar a lot and this is supposed to indicate they love each other and are meant to be but haven’t admitted it yet. Any bets that Janet’s life will be endangered?

At the dinner party, they meet Countess Marya Zaleski a painter, who gets to say, “I don’t drink … wine,” echoing the most famous line of the classic original Dracula film. There’s some after dinner discussion of the Van Helsing case, and Jeffrey’s involvement. He suggests that Van Helsing has an “obsession.” He believes that treatment might release the human mind from “any obsession.” This interests the countess. It’s not clear whether he believes his old teacher killed an innocent human being. Best not to delve too deeply.

Jeffrey meets the Countess in her apartment the next evening to discuss her problem. She never tells him the exact nature of her trouble – only that there is an “influence.” He tells her she can overcome her compulsion by will, that the best way to treat a drunk is to place him in a locked room with a bottle of Scotch!!!! She’s convinced he can help her. He gets called away on an emergency.

After he leaves, she decides to test out his theory and tells Sandor, “Tonight I paint. And I will need a model.” Sandor procures a young woman for her. 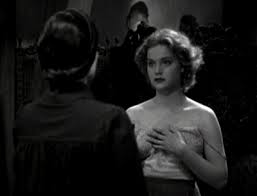 The Countess tells her, “You have beautiful hands but they’re so white and bloodless.” She’s offered some wine and biscuits. As the model takes off her blouse and lowers her bra straps, The Countess begins to hypnotize her. Despite her somnambulant state she shouts, “Please don’t come any closer” and lets out a scream. Again we fade out before we see anything. Next thing, she’s coming out of an ambulance – alive but staring blankly. She’s taken to the hospital. Dr. Garth’s diagnosis: “Post hynosis.” There are puncture marks on her neck.

Over at Scotland Yard, Garth and Van Helsing discuss the situation. Van Helsing is certain that Dracula is still dead, and maybe one of his victims has become a vampire and is responsible for the new attacks. Advising on how to find vamps, Van Helsing reminds the others that the undead need to sleep in the dirt of their graves and they have no reflexion. Garth, remembers that the Countess had no mirrors in her apartment and is beginning to put things together.

The Countess comes to see Garth the following night. She’s upset. “There’s nothing ahead for me but horror.” She wants him to go with her to the continent. She wants him to save her soul. But she’s still not telling him the truth. He gets a phone call. The victim, Lilly, is awake and able to talk. He tells the Countess to wait for him and also has to tell him the entire truth when he gets back.

Janet, the saucy secretary comes in and Sandor and the Countess kidnap her.

The model blurts out a few details – a woman, a Chelsea studio above a bookstore. Then she dies.

Garth goes back to his apartment. The Countess is gone. He goes to Chelsea and searches for the studio. Finds it, and calls Scotland Yard from the bookstore (because they didn’t have cell phones.)

He confronts the Countess who admits she’s Dracula’s daughter, tells him she has Janet, and she’ll trade Janet for him. She’s obsessed with his going with her. She esapes.

Van Helsing arrives and theorizes she’ll head for Transylvannia. Jeffrey charters a plane to follow her.

Over in some village in Transylvania there’s a wedding somewhere. The villagers are happy because no one is home over in Castle Dracula. They are all dressed in their finest anachronistic costumes leftover from The Bride of Frankenstein. But where is Una O’Connor? It’s not a village without her.

Someone, who is not Ms O’Connor, notices the lights on at the castle and screams, “ He’s come back.”

People run inside and a lot of doors get bolted.

Marya explains to Sandor that she knows she can’t be cured, but now she wants to make Garth her eternal companion. Sandor, who was previously promised that job, is not happy to hear this.

Jeffrey arrives at the gate. Sandor tries to shoot him with a bow and arrow. He misses. Meantime, is an unconscious Janet too tempting a morsel for the countess? Looks like she’s about to go for it when Jeffrey arrives.

Janet is “under a spell”. She’ll die if the Countess doesn’t release her. She makes Jeffrey the offer. He doesn’t “believe” in her magic Really? At that point?

Sandor shoots another arrow – this one hits the Countess in the heart, and being a wooden stake-like thing, kills her. He’s about to shoot Jeffrey when the local constables arrive with Van Helsing and Sir Basil.

Van Helsing and Sir Basil look at Marya’s body. Sir Basil remarks that she was beautiful. Van Helsing says, “She was when she died a hundred years ago.”

Huh? If Dracula died 500 years ago, and Marya is his daughter, how can that be?

I can’t help thinking there was a decent idea here, but it needed a much more thought out screenplay and a director who wasn’t patching it all together while maybe shooting a western on another lot. 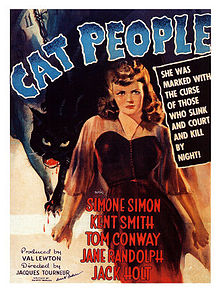 What if there was more mystery/debate over the magic/science issue? We are set up for that as we never actually see anything clearly supernatural, but by making it a “Dracula sequel” and showing us Dracula dead in a coffin, Van Helsing at the scene, we “know” she is a is a vamp. But what if she wasn’t Dracula’s daughter, but just a woman who thought she was a vampire, based on a family legend – or maybe she really was – but we couldn’t be sure and that mystery is at the heart of the film? Wouldn’t that be a hell of a movie? Oh wait, Jacques Tournier made that film six years later – only it wasn’t about vampires and it was called Cat People.

(First visit? I hope you enjoy the content on the blog. Want to win a paperback? Please visit the home page  before you go.)