THERE BE SPOILERS HERE 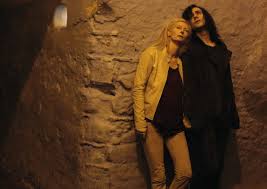 If you call your main characters, “Adam” and “Eve” you’re probably going for metaphor. But for the life of me, the deeper meaning of Jim Jarmusch’s retro-stylish, pomo, vampire art-film, Only Lover’s Left Alive eludes me.

The undead Adam (Tom Hiddleston) lives in Detroit, which here appears to be an almost uninhabited post-acopolyptic landscape. Not literally, but when out driving at night there are few other cars and no pedestrians. He’s a musician with a severe case of ennui. He’s suicidally depressed and blames it mostly on the living for having made such a mess of things and for being terminally stupid.

He gets his blood from a hospital worker. Under this movie’s rules, it conveniently doesn’t have to come too fresh and can be stored in the fridge. The source is played by a badly wasted Jeffrey Wright. “Underutilized” and “badly wasted” are words that often apply when talking about Wright. Now that he’s gotten a gig playing a television heavy, maybe he’ll finally get the recognition he deserves. It’s worked for other under-rated mid to late career black actors – Joe Morton and Giancarlo Esposito, specifically. But I think that’s another rant. 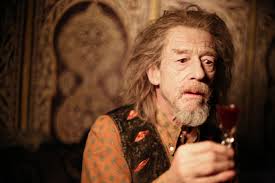 Meanwhile in Tangiers, Adam’s wife, Eve gets her blood at some cafe run by a man who is the lover or student or something of Christopher Marlowe – the Christopher Marlowe who allegedly died at age 29, but is played by John Hurt who’s kind of long in the fangs for this kind of thing. It’s not clear to the audience why or how he’s aged and can hardly walk. Did he fake his death and get vamped as an old, or did he age as a vamp? In any case, we are supposed to love him and – spoiler alert – he wrote all of Shakespeare’s plays. Marlowe gets the blood from a “French doctor.” It is apparently “the good stuff.” There’s a lot of talk about “contamination” which may or may not explain Marlowe’s aging.

There were various jokes and clues – visual and verbal – about how smart and well read these vamps are. Some of this was cute. Some was way too self-conscious and groan worthy. 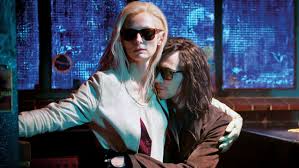 If you are going to pick your metaphors, here vampirism is clearly linked to addiction – probably heroin addiction or possibly absinthe – lots of scenes of vampires drinking blood from flasks or fancy little glasses and experiencing the rush. On the streets of Tangiers in search of a blood-fix, Eve and Adam look like the prototypical aging European, stylishly-hipster junkies.

ENDING SPOILER AHEAD: The plot is thin. Eve heads to Detroit to rescue her husband. Her manic-pixie vamp little sister arrives and trouble ensues. Adam and Eve need to leave town. Back in Tangiers there’s more trouble. Adam and Eve do not kill any mortals in the course of the film, but at the end, when their supply has been cut off, and it’s an hour till dawn, we see them prepare to drain a young couple. They do say they will “turn” them; nevertheless, the movie ends on a horror film shot of their approaching the couple with open mouths, vampy eyes and full fangs.

What are we to make of all this? Adam is an artist who doesn’t want his work to get out there. Marlowe got his work out by using Shakespeare as his dramatic beard, and he still scribbles long-hand although he no longer publishes. Eve is not an artist, but she reads a lot. Vampires are cooler than us and smarter than us and better than us. Or are they? They disdain the brutality and stupidity of mortals – whom they call “zombies,” but when it comes to survival they revert to brutality.

Is Jarmusch putting us on? Saying that in the end we are all whores? In the end all of us kill? Is it a muddle? Or am I being too literal and concrete? The acting is good, but the characters are too cool too love. They keep us at a distance. They’re interesting but hard to invest in. If Adam had put a wooden bullet through his heart, or both of them had turned to dust at sunrise, I wouldn’t have cared.

There’s not much new here vamp-lore wise. They wear leather gloves when they go out and sunglasses even at night. Both seem to be fashion statements. It’s not in any way a horror film or even vaguely scary. As for what it “says” about life or art, not much original there either. It’s not particularly sexy though both Tilda Swinton and Tom Hiddleston look amazing. It should be noted that Tilda Swinton is considerably older than Hiddleston, but both seem vaguely ageless and physically well-matched.

It’s a visually stunning, bore, and other than hard-core fans of the director, I’m not sure for whom it was made.

(VM Gautier hopes their own soon to be published pomo vamp novel will be more lively than this film and have better jokes. What’s the point of immortality, if you aren’t having fun?)