VM February 4, 2015 Marie Duplessis, The Road Ahead No Comments 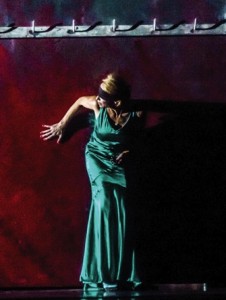 And “they” say opera isn’t edgy! The Metropolitan Opera’s current production of Bartok’s Bluebeard’s Castle, stars German soprano Nadja Michael as a Hitchcock-blonde Judith being led by her mysterious husband Bluebeard on a tour of various rooms in his castle.

Maybe next season they’ll go all out with a new opera, featuring the adventures of both Anastasia and Judith — Two Blindfolded Girls. FSOG started as fan fiction, so why not a mash-up, with music?

Meantime, my alleged alter-ego some writer, claiming to be the real me, has written a review of the current production at the Met.

(Hey, did you know you’ve reached the web home of Blood Diva? It’s the smart, sexy new novel that imagines the real-life woman on whom La Traviata was based as a vampire “it” girl in modern day Brooklyn. Go take a look! You know you wanna.)