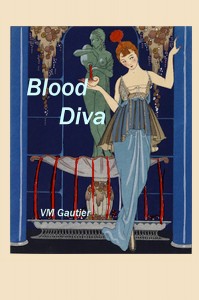 I may not have the book ready yet, but here’s the cover. How did I come up with it? A happy accident I assure you. I had in mind something Galetea-like. I know that may surprise you as the book is a kind of vampire-mash up with a “real” historical figure, but she’s a figure who invented herself with a little help from the men in her life, and she’s more likable when we see her that way. 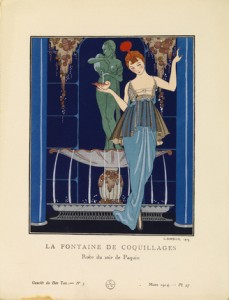 I was thinking of maybe a statue of a lady on a pedestal dripping blood. I was searching through images and somehow found this one by Georges Barbier.  I’d never heard of Barbier before, but as it turned out, I think this was a perfect choice. He often drew women who were both innocent and dangerous and did opera posters as well. As you can see, I made some changes. It’s not water flowing in our illustration, but blood. There’s a dash more red on the lips, and the figure is slightly elongated. One might argue that the time period is wrong for our Marie. It’s true Blood Diva is set mostly in modern times, and the historical flashback is 1840′s, not 1920′s, but as an immortal, Marie, or Alphonsine as she is known among her kind, was around during the period depicted in the picture. Like the illustration, she is timeless.

I’d love to know your thoughts on the cover. Feel free to comment. And by the way, somewhere I saw a reference to a website that does take downs of really bad  covers and I decided to submit for a critique. Not sure why I did that. I’m going with the concept no matter what they say, but I will keep you in the loop and let you know their “professional” opinion, which has to count because it’s on the internet.

Update: Just had the cover critiqued by these folks. Some ups and some downs. The basic criticism with which I agree — it always hurts when you know they are right — is the sloppiness of the added red, and the unevenness of the border. Not sure how can I better manipulate the image, but may look for a graphic artist type to work on it. Also  they weren’t crazy about the font. I like the cleanness of the font — especially for Kindle size, but when several people hone in on the same thing, it’s time to make a change. One person found the original  image used on another book, but given that there are gazillion books out there, I’m not worried about that. A couple thought there was something too light about it for a vampire novel. That’s where I’d disagree. The book is seriously dark, but the heroine, like the real Duplessis, is someone who always retains a kind of innocence. She’s the Holly Golightly of vampires.