Potential readers, I need your help.

I set out to write an entertaining little fiction, a commuter read with some naughty bits. But to paraphrase Ms Tina Turner, I never do anything nice and easy. How could you write about Marie Duplessis and make her a

vampire in the 21st century and not reference La Traviata? Somewhere in the world, it’s probably being performed even as I write this. How could my Marie not have an opinion about her various fictional counterparts? Wouldn’t her hanging out with Maria Callas, or Greta Garbo for that matter, be a hoot?

inspired or anything about her? I thought I was writing for both. However, a beta-reader unfamiliar with Duplessis, and no great fan of “urban fantasy” recently attempted a read, and I lost her. I feel like a surgeon whose patient died during a routine operation. Where did I go wrong?

It’s one thing to say, that a vampire is based on a real historical character; it’s another to have the fictions based on that figure be important plot points. Full disclosure, my initial elevator pitch was “La Traviata, with vampires.” It’s tough to balance giving too much background versus too little. I thought I did my job along the way, and I don’t want to spoon-feed readers, but I’m wondering if I shouldn’t start out with a brief preface, making sure everyone knows or is reminded of some basics before they start, if only to avoid confusion over the character’s name or names. She is known by others in the contemporary sections as Camille. She is known by the vamps and to herself as Alphonsine. She was known at one time to the world as Marie.

I already have a slightly extended disclaimer, acknowledging that historical personages are used fictionally, but I’m wondering if I need to go further. Would a preface work? How about something like this? Thoughts? 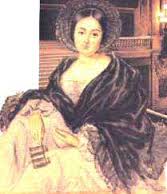 Prior knowledge of the “real” Marie Duplessis is not necessary for enjoying this work of fiction. However, a little background or review will make it easier to follow, and is provided below:

Alphonsine Rose Plessis was born in Normandy, France in 1824. She came to Paris as a teenager and soon was transformed into Marie Duplessis – a famous courtesan, known for her wit and delicate beauty. She died at the age of 23 of tuberculosis. Shortly after her death, Alexandre Dumas fils wrote a novel, The Lady of the Camellias, based on their love affair. A few years later, he wrote a version for the stage, which became immensely popular throughout the world. In his novel, and play, the Marie character was called Marguerite Gautier. Later, Giuseppe Verdi wrote the opera, La Traviata, based on the play. In the opera, the character was renamed, Violetta Valery. In the novel, play and opera (but not in life) Marguerite/Violetta made a great sacrifice for love.

There are several film versions of the story, including Camille with Greta Garbo, in which the heroine is still called Marguerite, but is also known by the name of her favorite flower. Contemporary viewers may recognize the story as the basis for the film, Moulin Rouge.

Out of respect for Mademoiselle Duplessis, let me reiterate that my protagonist, (referred to on these pages as Marie, Alphonsine and Camille) is a fictional creation. Her musings on life, love and men, her thoughts and mannerisms, are all made up. She is a character in a book. The real Marie (or Alphonsine if your prefer) died in 1848. You can visit her grave on your next trip to Paris. It is highly unlikely that she lived on as an immortal who survived on the blood of innocents.