(Note: This is combo recap/review. This is NOT a spoiler-free zone.) 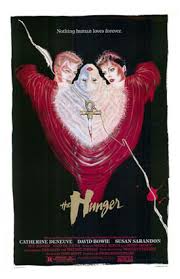 The Hunger is probably best remembered for the sex scene between a smoking hot Catherine Denueve and radiant Susan Sarandan. Sarandan explained in an interview that they wanted her character to be drunk when seduced by Deneuve. Sarandan thought that was silly. Why would anyone need to be drunk to go to bed with Catherine Deneuve?

Deneuve plays Miriam Blaylock, a seductive vamp who lives with her husband, John Blaylock (David Bowie) in a townhouse on the Upper Eastside. They troll the clubs and bring home beautiful young people who they seduce, drain and dispose of in their home crematorium.

Everyone smokes cigarettes in this 1983 film – including mortal medical researchers. It’s probably one of the last movies made that really glamorized smoking.

The story, from a 1981 novel, is very much in the post-Interview with a Vampire mode. The vampires are fully-formed characters and we are rid of some earlier tropes — while others are emphasized. These vamps can be photographed and see their reflections. But the film goes beyond even that, closer to the science fiction version of vampires than a “magical” one. They are another species – or at least Miriam, the original V, is. There is no religious gobbledygook whatsoever, and I don’t think the word “evil” is even used. They are able to go out in daylight, but they don’t seem terribly comfortable. (Miriam wears a veil, and John a hat.) They do not sprout fangs. Instead they wear ankh pendants with a little switchblade mechanism perfect for stabbing victims.

Sarandan plays Sarah Roberts – a doctor researching longevity and its relationship to both sleep and blood. She’s got a lab full of monkeys, one of which goes crazy early on. They don’t exactly know what happened, but first he ferociously attacks and kills a monkey that he “loved,” then he starts to age very rapidly and dies.

This parallels what’s happening to John Blaylock. When John starts to suddenly age, he’s in a panic. This has happened before. Miriam’s other companions have all worn out eventually. Once this process gets going, it’s unstoppable. Miriam, however, is different, immune. (Apparently, there’s more explanation of this in the novel on which the film was based.) There’s a teenage girl, a neighbor, Alice – an amateur photographer and musician who comes  to play classical music with John and Miriam. She clearly has a girl-crush on Mrs. Blaylock. Is she being groomed as John’s replacement? John thinks so.

Miriam goes to see Sarah at a book signing to find out if she can help with John,  but they don’t actually wind up talking. John goes to the clinic. Sarah thinks he’s a lunatic, raving about being “a young man.” She keeps him waiting, figuring he’ll leave eventually. When she sees him again, and sees how much he’s aged in just a couple of hours, she realizes she was mistaken, but he’s given up on her. He walks away. He tries to feed but realizes he’s too frail to overcome a large male victim. He returns home. Miriam is still out.

Desperate to feed, he kills Alice who shows up looking for Miriam. He’s angry and frustrated. Miriam promised him “forever.” It was clearly an empty promise. When she comes home she takes the now ancient John up to a pigeon-filled attic where her previous lovers all rest in metal boxes. There’s one for him. He wants to die instead and begs her for release.. She tells him there’s no release. He’ll see, hear and feel. She seems sad about this, but it’s not clear why exactly she can’t grant his wish. Wouldn’t his body burn in the fire? Or would that cause him too much pain, and she can’t bear the thought of it? Or is she just evil? Maybe you need to read the book to figure that one out.

Sarah, meantime, has been trying to track down John. After not being able to reach the Blaylock residence by phone, she shows up at the door. Miriam tells her John has gone to Switzerland, and invites her in. They wind up enjoying expensive sherry and talk while Miriam plays The Flower Song from Lakmé on the piano.

Sarah asks about the music.

Miriam tells her a little about the opera.

“Was that a love song?” Sarah asks

“I told you it was sung by two women.”

“It sounds like a love song,” Sarah says, and then she pauses, “Are you making a pass at me, Mrs. Blaylock?”

The sex itself is pretty restrained. We get a glimpse at the bare-breasted Sarandan, but her black panties are kept on. Less of Deneuve is exposed. It’s very softly lit and the aria continues – now with chorus, but on top of it there’s some electronic horror thing going on. It’s probably the most discordant combo you’ll hear in a movie outside of those Philip Glass orchestrated art films.

Later, we see Sarah not eating a steak at a restaurant with her boyfriend, Tom. It seems to be that evening. He’s suspicious about the three and half hours she disappeared for and why the hell did this woman she just meant give her that fancy pendant thing she’s wearing – the ankh.

“You just met her and she’s giving you a present?”

“She’s that kind of a woman. She’s European.”

Later we see Sarandan sick in a bathroom. A desperate Tom calls a doctor for her, telling whomever he’s speaking to, “She’s ravenous and she can’t eat.”

In her own lab they analyze her blood and find “two strains” fighting each other. One of them isn’t human. It’s stronger, more disease resistant. One of the doctors discovers a puncture wound on her arm. This seems to surprise Sarah herself. How much does she know or remember? It’s not clear. She goes back to Miriam’s demanding answers.

Miriam: “I made a simple incision. I drew your blood and you took mine. We belong to each other.”

Sarah leaves. Miriam tells her she’ll be back when the hunger is too much and she has to feed. She’ll need her to show her how. She does come back. Miriam goes out in a limo and picks up some gigolo (in Times Square) for her to feed on.

Tom comes around looking for Sarah. Miriam tells her to go up to her. Here the junkie/addict trope is going full force. Sarah is sweaty, crampy, sick.

She kisses Tom. She pushes Tom away. She kills Tom. She is the crazy monkey.

There’s very little explicit violence in the film. We cut away before it gets too gory. There’s blood dripping off of Sarah’s mouth when she goes to confront Miriam. Miriam explains the rules – she’ll need to feed once every seven days. She’ll stay young and beautiful forever. (We know this to be a lie.) She’ll grow to love Miriam.

Sara kisses her, and stabs herself with the pendant. According to websites that explain the ending, Miriam somehow drinks some of Sara’s combo-blood.

Now, we get to one of the worst endings ever! Miriam carries a weakened, Sarah up to the attic. Is she going to put this toy away with the others? John and the walking corpses leave their boxes (for the first time ever) and attack Miriam, pushing her over the edge of the railing. Somehow the combo-blood that Sarah got her to drink makes her weak and makes her age rapidly — like as soon as she hits the ground. Meanwhile, maybe all the exertion wears out the old-timers or something because they disintegrate to dust.

Next thing we know, the mansion is being sold with proceeds going to Sarah’s clinic. We see Sarah in a swank London apartment with her own young acolytes. Miriam is screaming in a box.

The book (which I haven’t read) doesn’t end like this. Apparently, this is the ending the film studio wanted for possible sequels, which never happened because it was so lame.

This is unfortunate. The film is remembered for its stylishness, and the sapphic-love scene. It is stylish and the women are hot, but with a decent finish that was true to the characters and the story, this could have been more. Sarah could have and should have chosen death over a life that required taking the lives of others. That would have been right the course for a character whose life was spent trying to prolong life.

Despite it’s flaws, it’s still worth taking a look at. The music score is a powerful mix of classical and contemporary, and it’s really integrated into the story. The film looks great. Miriam’s costumes are gorgeous, and while very 1980s also reference 1940s classic-noir.

If like me, you are interested in how vampires have “evolved” in books and movies, it’s a must. The vamps are super-elegant and refined, but they are also  very sexual. There’s nothing “goth” about them. I didn’t consciously borrow from the film. I hadn’t even seen it for years, but I’m sure it made an impression on me and that worked it’s way into Blood Diva.  I could spot several parallels. I won’t call them “references” since a reference requires awareness. This was more like visiting an old relative you haven’t seen such childhood, and suddenly noticing a resemblance.

If anyone who has seen The Hunger AND read Blood Diva wants to write a guest blog speculating on the influence of the movie on my novel, I’d happily  pay you with a paperback and a mug.